In The Red welcomes views, comments and informations that can aid the cause of  the project.

Turay and The Red Man 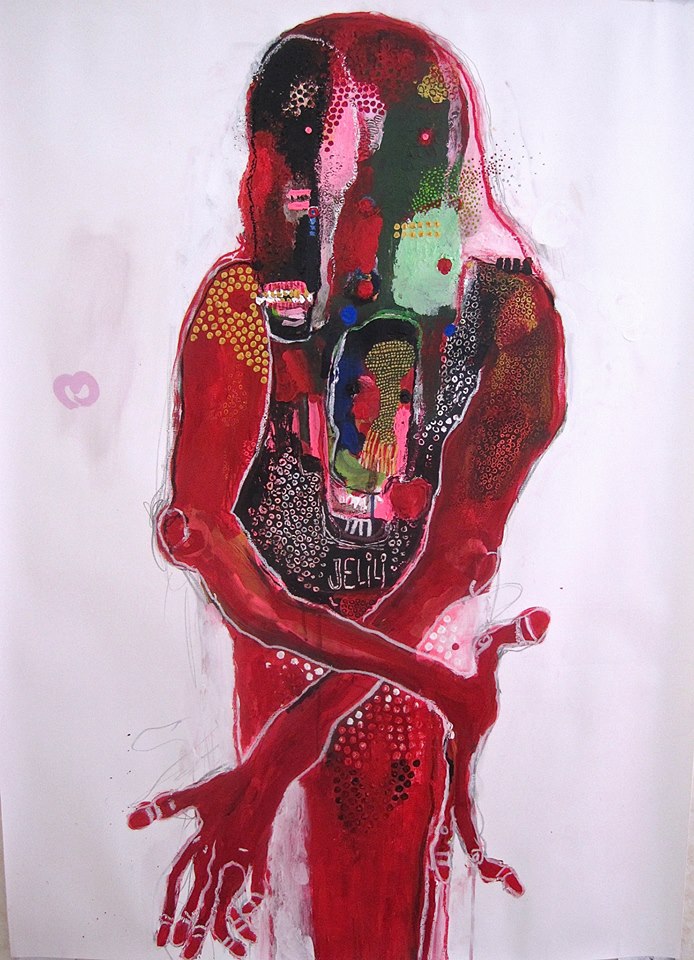 Photo: courtesy of the artist.

Yesterday, May 18 2013, Adama C. Turay, a Japanese artist posted an image of her painting on facebook. The painting titled, Red Man (2013, Acrylic, Crayon & Pencil on Paper, 109cm x 79cm) was her respond to my on-going performance project, InThe Red.

Adama is my friend on facebook and I had initially thought she is a Nigeria. But when I enquired about he rnationality she said, “I am a Japanese and married to Sierra Leonean”. I find it difficult to reconcile the characteristics of her paintings to the “elegant refinement and economic prowess” of typical Japanese paintings. But when she declared that her works incorporate multiple influences from Japanese - "UKIYOE", German contemporary art and African contemporary art; I felt the interconnectivity of art in our modern times.

Adams’s paintings fascinate me a lot, and I have a great admiration for the freedom she displays through the use of colours, forms and space which are often conceptualized.  I felted excited when she announced on the 4th May that she would be painting my portrait. My immediate reaction was to ask her how would that be possible.“Are you coming to Lagos?” I asked.  Her respond heightened my interest in her goal. She said she had been studing and following thread of my performances and would allow her observations, feelings and thinking to dictate the forms of her painting. “What I want to paint is "love", "humanity" and simplethings”; I wish to do this through the painting of you” – this was her concluding statement in our prelude facebook conversation/chat prior to the painting of Red man.

Adama’s preliminary sketch for the painting. Photo: courtesy of the artist.

And behold…! When the image of Red Man surfaced on facebook I looked with my whole self engrossed in the contents and forms of the painting. I looked at the fingers in the paintings and looked at mine and saw a strict resemblance of slimness and multiplicity of its physiognomy. My attention was drawn to the two heads and the words, Jelili, which sits beneath the heads. At a moment I was lost in the seemingly mundane posture and its illumination, but on the other hand I found myself racing in thoughts and searching for the meanings of some the images that appear to be symbolic in the painting. I eventually seek for an independent view from somebody who is a lay person in the field of arts. This person looked at the painting for few minutes and effortlessly said, Ebora Jelili meaning Jelili’s Alien. 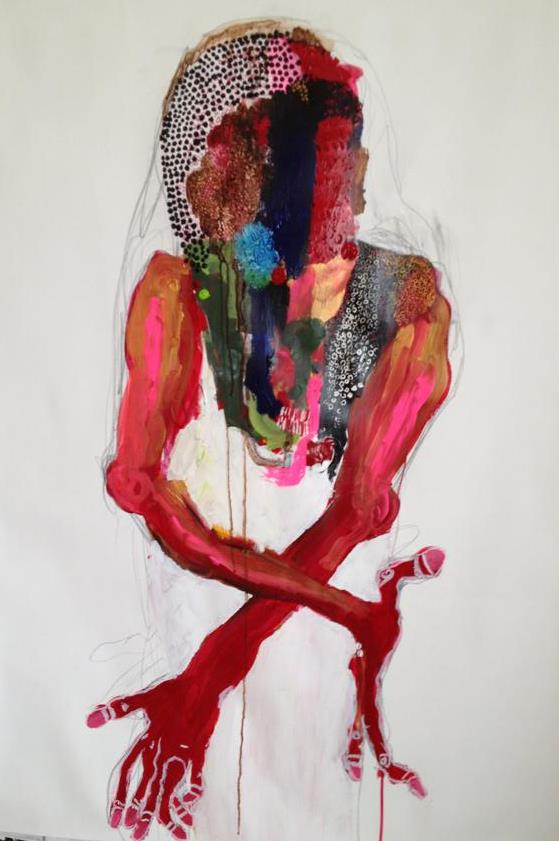 Adama’s painting in progress. Photo: courtesy of the artist.

Of course I had expected a kind of staggering interpretations from my lay co-audience of Red Man but what I was not prepare for was his extreme coding of the different body of expressions as emanate from the painting.  My mind wondered around the paintings and the words of Pablo Picasso, “The purpose of art is washing the dust of daily life off our souls” came readily as a dialogue point. Adama succeeded by carefully observing the impulse behind In The Red project as well as the endeavours of my everyday world. The Red Man is broad and the elements therein are non-antithetical. She has a profound respect for direction of InThe Red project. From her comments below, it is glaring that she paints from the inner part of the people, a preference to bring out their true nature:

When I saw the photographs and videos of Jelili Atiku’s performance I thought that I would like to draw and paint him. I looked at the images again and again and I was fascinated.  I asked myself, what was he thinking and feeling when he was performing such intense, strange, strong and beautifully performance.

Therefore,my painting, "The Red Man" is influenced by "In The Red", which is one of the artworks of Jelili Atiku. I feel this performance adequately projects and expresses his personality as a person (human being);and as a performer. Jelili said, “In all these events, unquantifiable amount of blood from both human and animals were spilled on the earth.  Thus, humanity is mummified with red, and jumps in horror here and there. We as people are holdup, hodgepodge and higgledy-piggledy” - http://intheredperformance.webs.com/introduction.

"Humanityis IN THE RED!!!”,  he said; isn't this the best phrase to show the present state of humanity?  In my thinking, I felt: the person who seems to stand still in this picture is Jelili Atiku himself.  His body is covered with blood. However, much crack and mark can be seen here and there in his body.  Possibly blood may be flowing and it may not be flowing too. He has many eyes. A certain eye is an eye which memorizes and is actually sad about anxiety. Another eye is an eye which has looked down on people heartlessly. Another eye is an eye which is going to wound people from now on. Another eye is an eye which is trying to hide his heart. And another eye is a view which is looking at the future calmly. His true face is beside the heart and is going to tell something. His brain is fulfilled by the golden grain. There are seven fingers on the left hand of him. This expresses his wisdom and respect of achievement which continues from now on.His right hand was opened greatly and has bent backward for strain. This expresses the soul of the uncompromising attitude over something that is going to rebuke him. And his arms are crossed greatly.  In fact, there is this person in the womb, Just like a baby. All also of the blood as for which people are killed and the blood "red" who comes out when a mother gives birth spills on the ground are from man.

As said by Melanie Banayat (in:www.miligirl.com) “I’m not sure that it’s so important whether or not a person speaks up and shares what they think about a painting. I think the important part is that they remained in front of a piece of art long enough to allow it to have an impression on them.”